Wildfire smoke breaks records, hangs on; ‘like living in a constant state of fog’

BREMERTON — Valarie St. Pierre is housebound, a prisoner to the thick stench of wildfire smoke that pains her lungs and has enveloped the Pacific Northwest.

A trip to the park with her grandkids late last week left her lethargic, huffing for air and ultimately on the way to the emergency room. St. Pierre, who suffers from asthma, came home with multiple medications and breathing devices to weather the smoke outside. On her lone open window, she’s attached a fan and two air filters that are already turning black at the shadow of the fan’s blades, like the footprint of an unwanted visitor.

“I’m not going anywhere,” she said. “I just pray this ends soon.”

Many residents like St. Pierre have hunkered down in the face of record-breaking levels of wildfire smoke pollution, at least since modern data-keeping began. The Puget Sound Clean Air Agency reported Monday that the weekend’s air quality, recorded at its longest-running Seattle site, consistently displayed the highest levels of pollution in the air since it began recording in the early 1980s. 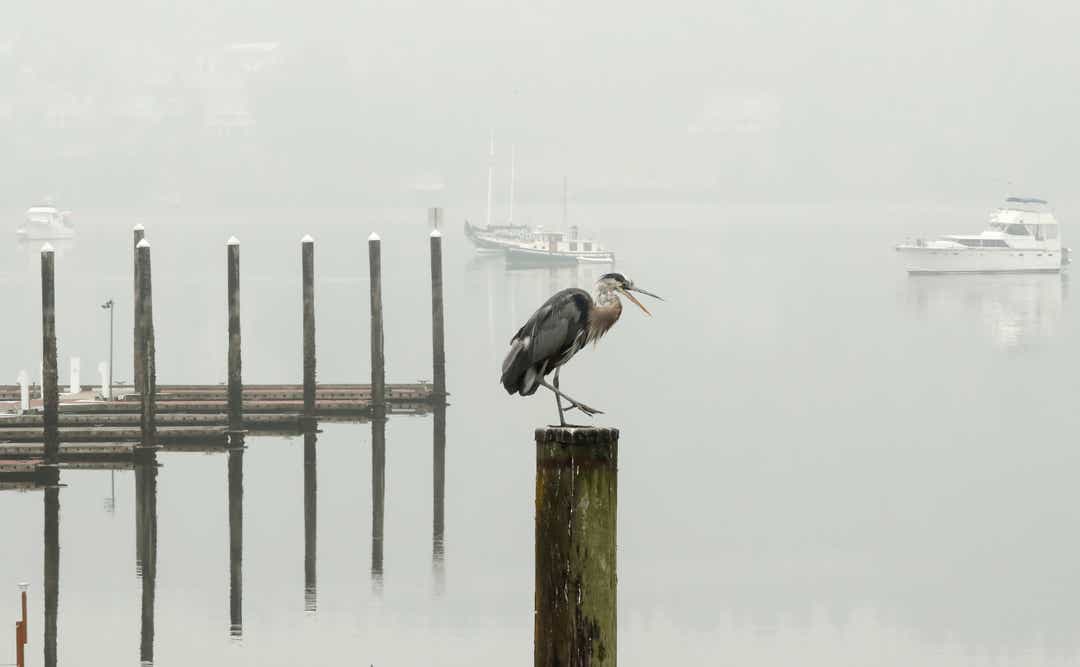 Graeme Carvlin, an air resource specialist with the agency, said its monitors have stayed at peaks in pollution that only occur temporarily at other times of poor air, such as the fireworks-blasting Fourth of July. And the recent data is 50% higher on average than during the worst day of the 2018 wildfire season, he said.

Hopes over the weekend that a new weather front would bring rain and winds to carry the smoke away faded by Monday morning. That front turned out to be much weaker than predicted, and its relief, at best, will bring scattered isolated showers, said Justin Pullin, a meteorologist with the National Weather Service in Seattle. It’s going to be much later in the week that another front could bring additional precipitation and winds to drive the smoke out.

“It’s like we’re living in a constant state of fog,” Pullin said.

More: How air quality is monitored in Kitsap — and when we could see relief

The smoke reminded St. Pierre of living in Montana after Mount St. Helens erupted in 1980. Last week, when the smoke was more diffuse, sunlight could peer through, which promotes mixing air. Not so this week, Pullin said. Cold air and the smoke are stuck close to the ground, an effect that will also keep temperatures below 70 degrees this week.

Pullin said the computer modeling forecasters rely on just aren’t adept at forecasting accurately with such an onslaught of wildfire smoke.

“The models have not handled this very well,” he said.

The next system that could bring rain and wind, currently off the coast, should arrive late Thursday or sometime Friday. “If it all holds well, we should get a decent enough rain Thursday night and into Friday to get some of this smoke cleared,” he said.

Employers have curtailed certain work and some employees are taking time off as air quality remains at “very unhealthy” and even “hazardous” levels around the region. The Puget Sound Naval Shipyard, Kitsap’s biggest employer, has told supervisors to “try and limit time outdoors and to take breaks as necessary,” according to Matt Bailey, PSNS spokesman.

“We also encourage any employees who are sensitive to these conditions or who have a medical condition which the smoke may affect, to speak with their supervisors to discuss leave options,” he said.

For St. Pierre and others, it’s day-to-day as the smoke remains. She’s nursing a hoarse, sore throat with teas, popsicles and cough drops. She’s also dealing with the side effects of a steroid her doctor put her on.

On Sunday, she thought she’d be able to hop outside quickly to let her dog run, take the garbage out and grab vegetables from her garden. In two minutes’ time, she couldn’t stop coughing.

Josh Farley is a reporter covering the military for the Kitsap Sun. He can be reached at 360-792-9227, [email protected] or on Twitter at @joshfarley.